A complete redesign of Nigeria’s banknotes has been announced as part of a plan to make it harder for terrorists to hoard ill-gotten cash.

The redesign will make the most valuable notes already in circulation unusable with just a few months’ notice. Removing old notes will render stores of currency held in forest hideouts useless, the bank’s leadership believes.

But some terrorism experts say the plan may not be as effective as the government hopes.

From Jan. 31, 2023, the existing ₦200, ₦500 and ₦1,000 banknotes will become obsolete. Replacements for the country’s three most valuable notes will begin circulating on Dec. 15 this year, according to The Central Bank of Nigeria (CBN).

“In view of the prevailing level of security situation in the country, the CBN is convinced that the incidences of terrorism and kidnapping would be minimised as access to large volumes of money outside the banking system used as a source of funds for ransom payment will begin to dry up,” said the bank’s Governor, Godwin Emefiele, in a press briefing on Wednesday, Oct. 26.

The new policy implies that cash outside the banking system – which, according to the apex bank’s Governor, forms over 85 per cent of the entire money in circulation – must be deposited into the commercial banks for eventual exchange with the newly designed mints.

The entire process will be under the surveilling optics of the CBN and the Economic and Financial Crimes Commission (EFCC).

Logically, the terrorists will have to choose between the risks of being trapped while smuggling the ‘huge amounts’ they have accumulated through ransom payment into the banks or see it become valueless. Policies that will be introduced after the exchange process are also expected to reduce the amount of cash available to the public to pay ransoms.

In Northwest Nigeria, one of the regions with the highest incidences of terrorism and kidnapping, this is not the first time the government is deploying non-military measures to combat insecurity. Peace dialogues, motorcycle bans, shutting of filling stations, shutting of local markets, and the suspension of telecommunication services have been attempted in the past but with few successes.

As a result, expert opinions gathered by HumAngle are deeply polarised on whether the new policy will work in the region.

For Dr Yasin Abubakar, a financial historian, the CBN policy will come with unintended negative consequences for the larger population, such as the depreciation of the value of the naira and inflation. But it would certainly help in reducing insecurity in the region.

He recalled that “one of the war strategies deployed by Nigeria in the effort to crush the Biafran rebellion during the Nigerian Civil War was the changing of the colour and design of the country’s currency in 1968.”

Dr Abubakar acknowledged the myriad differences between the conflict situations in the 1960s and contemporary times. The rebels in the 1960s were, for instance, easily identifiable, quite unlike the terrorists who deploy guerilla tactics.

Nonetheless, he suggested that the process of returning existing notes to the banks and obtaining the newly designed notes could lead to short-term cash shortages that would affect the terrorists’ activities, which are mainly aided by the cash in circulation.

“Two things have been driving kidnapping. The GSM [mobile phone] and cash. Without contact with the relatives of the victim, there would be no kidnapping. And without cash available, the kidnapper is left with the option of not to kidnap at all or with the conundrum of kill-or-release, with no benefit either way. After a short while, it will be a worthless venture and abandoned,” said Dr Aliyu Tilde, Bauchi State’s Commissioner of Education, supporting Dr Abubakar’s view.

The public analyst believes face-lifting the currency would give the CBN a chance to release limited cash to the public and thereby push the country’s drive towards a cashless economy.

While admitting that the transition to a cashless economy could be tasking, especially for rural people, Dr Tilde added that the people would eventually adapt, especially since it is a choice between cash circulation and the security of their lives.

Certain realities in the Northwest are, however, making the ‘security wisdom’ behind the CBN policy lose its convincing power. And that is leading many to question whether the policy can truly curb insecurity.

Dr Murtala Ahmed Rufa’i, a security expert with over a decade of research experience on terrorism in the Northwest, told HumAngle that the security dimension of the new policy is not properly guided “because the Nigerian state, including the CBN, does not actually have the statistics of the amount of money that is in the hands of these terrorists.”

Data released by SBM Intelligence, a think tank, revealed that an estimated amount of ₦9.5 billion ($21.5 million) was collected by terrorists as ransom across the country between 2011 and 2022. This means the ransom collected by the criminals over the years is only a tiny portion of the ₦2.73 trillion that is reportedly outside the banks’ vaults.

Rufa’i believes there are even lower amounts with terrorists operating in the Northwest. They have mostly invested their cash in the purchase of cattle, weapons, motorbikes, and property, he says.

“Only a very foolish terrorist leader keeps cash. The bandit leaders I know very well are people that usually abduct for money. But then immediately they get that money, they move into transferring and exchanging the money mostly with cattle…that is why even within their circle, competition revolves not around the amount of money you have in your possession, but the number of cattle.”

Criminal groups in the Northwest are often organised with complex networks of seemingly innocent accomplices, including informants, logistics suppliers, and cash brokers. Through these accomplices, they could channel the disposable amount of money, which they keep in their possession, into commercial banks and get new notes in return.

The government’s and CBN’s surveillance will hardly reach local markets. The implication, Rufa’i contends, is that the terrorists could hide under the anonymity of the market crowds to exchange the money in their possession with other valuables.

“If a cattle owner decides to sell 10 to 20 heads of cattle today and take the money to the bank, who will apprehend them? It is their cattle. They have the evidence. Who was the cattle sold to? Nobody knows. Probably a terrorist! So, I think there is a gap.”

Beyond the disposition of cash, Rufa’i said redesigning banknotes may not discourage terrorists from abducting people for ransom. “If they should abduct today, and the change in the naira note starts today, they will demand the new notes. And nothing will change.”

Local sources in the Kankara local government area of Katsina State; Gummi, Bukkuyum, and Kaura-Namoda areas of Zamfara State; and Zuru Emirate in Kebbi State revealed how terrorists have improvised against the government’s measures in the past.

Following different security measures taken in the past, such as motorcycle bans, shutting of telecoms, shutting of local markets and shutting of filling stations, the terrorists have variously resorted to kidnapping and community-raiding, not for money, but for items such as foodstuffs, petrol, motorbikes, etc.

Although there is no evidence that the typical Northwestern terrorists have collected ransom in currencies other than naira, the Jihadi groups – Boko Haram, Ansaru, and Islamic West Africa Province (ISWAP) – which are continuously making inroads into the region, are setting the pace in this regard.

Part of the ransom of over ₦2.3 billion ($5.2 million) paid to the terrorists that abducted people in the Abuja-Kaduna train attack in March this year was paid in US dollars. In border communities, especially near the Niger Republic, ransoms are also paid to them in the West African CFA franc.

An analysis of social media trends shows how the new policy is dangerously polarising public discourses among Nigerians.

Immediately following its announcement, the proposed policy incited fierce debates, particularly about the ajami (Hausa language written with Arabic inscriptions) on the notes, with many in Southern Nigeria interpreting this as a form of Islamic hegemony.

From the Northern divide, many Muslims are also suspecting the move to redesign the currency as a plot to remove the Arabic letters, as was done in the cases of ₦5, ₦10, ₦20 and ₦50 in 2007 and 2009. The Northerners are passionate about the ajami, which is originally meant to help Northern Nigerians without western education, but who are literate in Arabic, to easily identify and differentiate between the currencies.

On Oct. 28, the Minister of Finance, Zainab Ahmed, lamented that the CBN did not consult her Ministry in the move towards redesigning the naira notes. The condemnation of this move by the Minister as one that will come with serious negative consequences if not stopped signals how the government itself is polarised by the proposed policy.

A tinge of hope

Despite the differences in the compelling realities presented on both divides of the security discourse, they all point to one important fact: that the new policy will not yield the envisaged results until it is backed up with committed efforts.

In Rufa’i’s view, for instance, as people struggle to get cash off their coffers, the government must keep an eye on local markets and other informal sectors to ensure the identification, arrest, and trial of suspected criminals.

Abubakar advised that by the time the envisaged shortage of cash circulation would weaken the terrorists’ financial base, the government should have followed up with serious intelligence gathering and fierce military operations before the terrorists begin to improvise.

All these, in the opinion of Tilde, need to be followed by robust, permanent sustenance of a cashless economy by the CBN. Less cash flow and more cashless transactions would go a long way in curbing kidnapping, he argued.

On a more general plane, steps should be taken towards taming poverty and ignorance, the root causes of insecurity.

Unless these and similar efforts are used to back the new policy, it would be difficult to convince the average Nigerian that the policy is in the interest of their social and economic security. 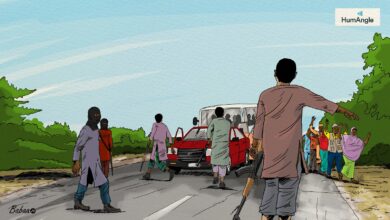 Southern Nigeria Roads Are Under Siege