Despite several remedies proposed by professionals and analysts, Nigeria’s security situation has worsened. Thousands of people have continued to flee their homes in the Northwest and North-central regions as a result of unabated attacks and conflicts that appear to defy all solutions.

Various methods have been attempted, ranging from a “fire-for-fire” approach to carrot-and-stick and, in some cases, amnesty programmes for terrorists who lay down their arms and accept peace. All these seem ineffective, at least at the moment.

While thousands of Nigerians have fled to the neighbouring Niger Republic as refugees from Sokoto and Zamfara states, others have escaped to various villages and cities as a result of recurring clashes or attacks by terrorists.

Terrorists who attack, pillage, and rustle cattle in many villages across Northwest and North-central states have turned those hamlets into killing fields. Hundreds of women have been raped during day and night raids by the marauding terrorists, while children have been forced to flee their homes. Many parts of Northwestern Nigeria have been hit by humanitarian crises.

According to reports, Jihadists wreaking havoc in Northeastern Nigeria have already made their way to the Northwest, where they are attempting to train the region’s armed militias to convert them to ideologically backed terrorists. Experts have warned that if this terrible merger is not stopped, it will have disastrous humanitarian and security effects.

Nigeria has deployed its military might to confront Jihadists who operate in the Northeast and who have disrupted social and economic operations in various areas of the Lake Chad region. Some Boko Haram fighters, particularly those from Shekau’s side, are surrendering to the Nigerian Army, but observers warn this should not be interpreted as the end of the insurgency, but rather as a new beginning for a war against the other faction.

The Islamic State West Africa Province (ISWAP) has already seized authority from Boko Haram’s Shekau faction and created a “caliphate” in the Lake Chad region, where they are enforcing their own interpretation of Shari’a law.

The terrorists were recently seen in a Shari’a court sitting executing functions and performing other judicial functions, as opposed to Nigeria’s legal system, in images released by the ISWAP and seen by HumAngle.

While terrorism in the country’s northern region is festering, the Southeast is also fast becoming a hotbed for attacks where suspected separatists have attacked some strategic government institutions.

A multifaceted approach to resolving insecurity in Nigeria required

Abdulrahman Dambazau, a retired Army general and Nigerian former Chief of Army Staff has maintained that Nigeria’s security concerns necessitate multifaceted remedies. This suggests that the country’s effective struggle against insurgency is being hampered by the current policy of adopting a single  approach.

Dambazau, also a former Minister of Interior, said in a tweet that combating insecurity in Nigeria requires not only the use of force, but also administrative justice, socioeconomic conflict management tools and effective governance. 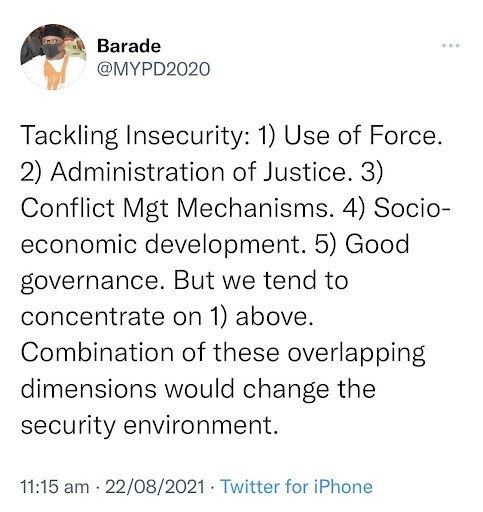 Nigeria appears to be focusing solely on the use of force while ignoring the other “overlapping dimensions whose combination would change the security environment,” the retired general opined.

He believed that despite the country’s massive investment in the security sector, a durable solution to insecurity required basic administrative fairness and good governance.

Besides the observations of Dambazau, some other Nigerians argued that Nigeria’s poor socioeconomic performance and misgovernance are also important contributors to the country’s insecurity. Those who share this thought, believe that citizens are feeling marginalised and, in some cases, taking up arms to express their frustrations, which contributes to insecurity.

“The failure of governance in Nigeria manifests in the declining capacity of political leaders to recognise systemic risks such as election fraud, terrorist attacks, herder-farmer conflict, armed banditry, and police brutality and put in place the necessary measures to navigate these challenges,” wrote Obasesam Okai, Assistant Professor of Justice and Peace Studies at the University of St. Thomas, Minnesota, and Maryanne Iwara, a Senior Research Fellow at the Institute of Peace and Conflict Resolution.

A team of eminent personalities, including governors and clerics, have also argued that the use of force alone could not solve Nigeria’s security challenges. However, efforts to bring about other changes have been received with suspicions.

In the Northeast where Boko Haram members are encouraged to embrace peace and pass through deradicalisation processes through a program named “Sulhu”, a Hausa term for reconciliation, several people have criticised the program saying it is rewarding good life for terrorists.

However, other experts have said that it is better to approach the insecurity situation through such programs in a win-win approach as using force will only prolong the war that needs to be finished soon.

Nigeria’s insecurity is exacerbated by corruption

YZ Ya’u, the Executive Director of the Centre for Information Technology and Development (CITAD), stated in the preface to a compilation of writings showing how corruption in the security sector affects Nigeria’s response to insecurity, that “some actors in the conflict do not want it to end because they profit from it.”

“The media is suffused with reports, revealing cases of government officials, entrusted with the public funds, for either restoration of peace or to purchase equipment for the army or even rebuilding of burnt communities, who have pocketed the money, doing nothing about the assignments they were given,” Ya’u wrote.

He added that, “a war economy is springing up and consolidating across the landscape of conflicts in the country in which the conflict entrepreneurs are continually stoking the fire of conflicts, ensuring that the conflicts are never resolved and brought to closure. They seem to be more interested in prolonging the conflict than ending them.”

In one of the papers published on “The Impact of Corruption on the Counter-Insurgency Efforts in North-East Nigeria,” Hassana Ibrahim Waziri recommended that “there is the need for transparency in all the processes of the counter insurgency efforts in order to shield any corrupt practice, including corruption in the anti-corruption agencies.”

Like Dambazau, Waziri maintained that an “integrated conflict management approach is highly recommended as suggested in various forums, to reduce the  strategy of meeting violence with violence and explore dialogue and reconciliation for a sustainable end to the crisis.”