Compared to figures for the previous month, more people were kidnapped in Nigeria in November, according to data gathered by the Nigeria Security Tracker (NST).

Between Nov. 1 and 30, a total of 311 people were kidnapped across 20 states in the country. This is a 32.3 per cent increase from the number of kidnap victims in October.

Niger and Kaduna states still top the chart with 108 and 92 victims each. They were trailed by Zamfara, Katsina, and Delta.

The one incident where most people were abducted took place in Zazzaga, a community in Niger State, North-central Nigeria. On the night of Tuesday, Nov. 16, 68 residents were kidnapped by terrorists, who invaded on dozens of motorcycles.

There were five other incidents where the victims numbered at least 20. Four of these took place in Kaduna State, Northwest Nigeria, while the fifth again happened in Niger.

One of the hardest-hit Local Government Areas is Chikun in Kaduna, which was attacked at least thrice last month. During each of those attacks, dozens of people were abducted. Days later, on Dec. 2, another 50 persons were kidnapped from Unguwan Gimbiya, a community in the area, and two others shot dead. 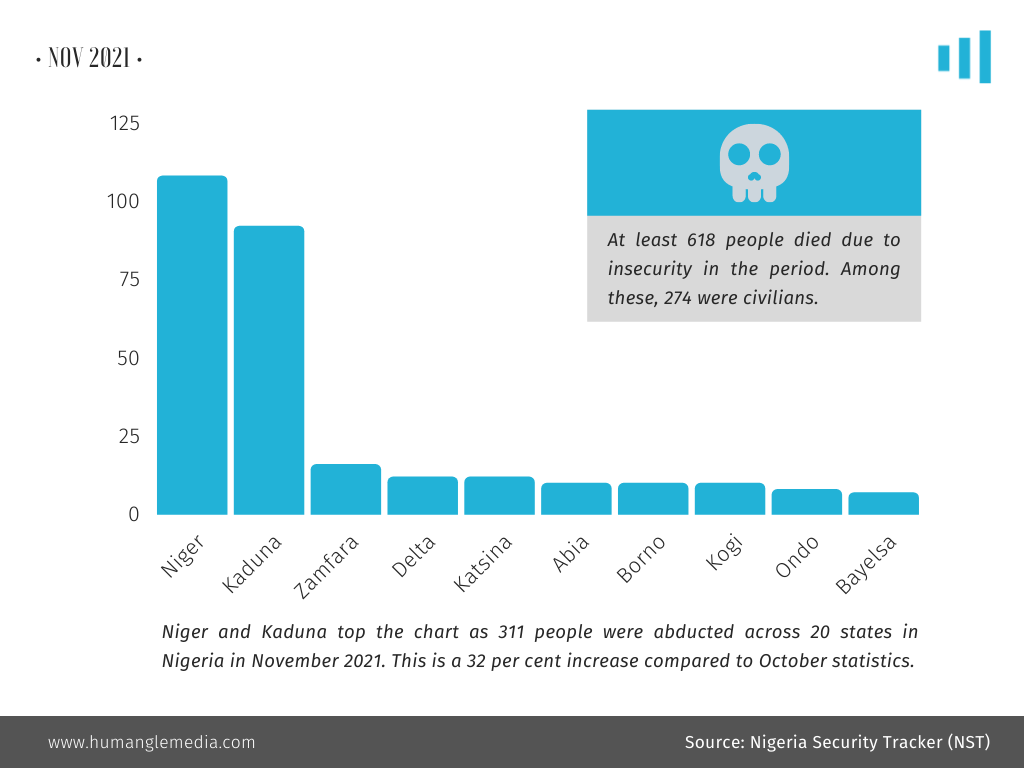 Also in November, as many as 618 persons died due to insecurity in Nigeria.

Among the fatalities were 274 civilians and 44 security personnel. One hundred and fifty-five insurgents in the Northeast, two kidnappers, and 143 other armed persons were also killed.

Compared to figures for October, the number of civilians killed has slightly increased while the general death toll dropped from 725.

The highest civilian death toll was recorded in Sokoto State, where 43 persons were killed on Nov. 14 in a series of attacks on Illela and Goronyo LGAs.

It was also in November a Brigadier-General of the Nigerian Army, Dzarma Zirkusu, and three soldiers were killed in an attack by the Islamic State West Africa Province (ISWAP) that took place in Askira Uba, Borno State, North-east Nigeria.

“So, all agencies – committed to providing security for Nigerians and the maintenance of law and order – have been ordered to improve on their activities, intensify surveillance, and minimise if not eliminate totally any threat,” he said through interior minister Rauf Aregbesola.