Indiscriminate consumption of alcohol was a habit for Tagwai Patrick, 28.

“I just grew up with it and it was a normal thing, and I eventually got addicted to it,” explained the resident of Romi, a community in the Chikun area of Kaduna, Nigeria. “Interestingly, I never noticed I was addicted even though those around me had shown disdain for this tendency. I never really cared.”

On the other hand, Yakubu (not real name) had been addicted to drugs for over 10 years. From the beginning, he indulged in it with his peers for the fun of it. He wanted to feel “among, as it was a normal thing” for those his age in his community.

“Whenever I take them, I feel on top of the world and it helps take my mind off challenges and issues; the drugs became like love to me,” he told HumAngle.

Substance abuse, the World Health Organisation (WHO) states, generally “refers to the harmful or hazardous use of psychoactive substances, including alcohol and illicit drugs”. One of the major effects on society is the negative health consequences experienced by its users. In 2021, the Director General of the Kaduna State Bureau for Substance Abuse, Prevention, and Treatment (KADBUSA) said about 10 percent of the state’s residents engaged in drug abuse, rekindling the conversation about how to fight the scourge.

One organisation addressing this challenge in the state is the Youth Orphans and Widows Empowerment (YOWE). An NGO founded in 2008, it is dedicated to ensuring young people achieve their full potential.

YOWE’s projects include awareness creation, psychosocial support on drug and substance usage, as well as linkages with organisations like Biswan Foundation (BBS), where they provide skill acquisition and also house addicts.

It was during one of such programmes that Patrick finally realised he was addicted and decided to seek help.

Over the last few years, YOWE has directly linked dozens of people to different types of treatments and vocational training while the organisation itself provides psychosocial support.

Eric John, a Programme Coordinator at the organisation, said, “During our community awareness and message delivery in the communities, we speak to some of these persons. We use stories and pictorial evidence in depicting the stories on the dangers of substance addiction.”

John revealed that some of the drugs and substances commonly abused are tramadol, codeine, alcohol, and cigarettes. Their abusers start from smaller quantities and graduate into taking more with time.

“So this becomes an addiction. And if they don’t take it, they feel unproductive. So you always find them with bottles of syrup,” he said.

Patrick’s challenge was with alcohol. “I never knew I was addicted until the organisation came to our neighbourhood for sensitisation,” he recalled.

The process of rehabilitation for Yakubu started by first identifying his need, which was psychosocial support, while building a strong relationship between him and the organisation. This way, communication became much easier. He was also linked to temporary job opportunities and social gatherings that exposed him to positive influence.

YOWE noted that drug addiction is at the root of some of Kaduna’s societal ills. To enhance its work, it partnered with organisations in the area of nutrition, community peace-building, as well as sexual and gender-based violence, which is also linked to drug and substance abuse. “When someone is into drugs, anything is expected,” Eric pointed out.

The NGO carries out its activities mostly in communities in the Chikun Local Government Area (LGA) like Maraban Rido, Romi, Narayi, Sabon Tasha, and Television.

“These are places where we have some of these persons and we try to address these issues first by sensitisation,” John said. “After they spoke to us that day, I felt the need to meet them for counselling. They wrote my name and scheduled a meeting at the office with a counsellor, and subsequently we had periodic sessions. We are so close now,  like friends.”

Over the past few months, the organisation has gone beyond linking beneficiaries to empowering them. Patrick recently got a job with a security outfit after YOWE’s recommendation.

“My plan is to save money and return to school to further my education,” he told HumAngle. At the moment, he feels he is getting back the respect he lost from those around him. He is also considering marriage.

“Before now, they did not take me seriously, but now I take up some responsibilities at home and I have an improved sense of belonging in the house,” he said.

As long as they are engaged through learning a skill or education,  John explained, “there is a high chance of overcoming addiction faster; but if after rehabilitation they are still idle, the chances of returning to addiction is still very high”.

Despite these successes, the organisation faces challenges, especially in staff capacity.

“Although we have many volunteers who come around, we cannot keep them as staff and they eventually move on to other endeavours. It also takes a lot to train new staff or volunteers,” John said.

Then there is the challenge of funding. “This project is one that is highly capital intensive and needs funds and partnership. Without funding, the least we can do is identify cases [through sensitisation and counselling] and provide linkages.”

Another gruelling challenge is the lack of proper documentation of beneficiaries due to poor follow-up after linkages are established.

“Having linked these beneficiaries to other organisations for treatment, we sometimes lose track of the progress made by them,” Eric concluded.

YOWE is yet to fully collaborate with KADBUSA. Eric believes that, with the agency, they can report cases as well as get support and linkages. Unfortunately, responses to requests for support have been poor and discouraging. Yet he remains optimistic that the presence of the government in the space is a huge boost to the fight against drug and substance abuse.

Now different from who he once was, Patrick admitted that his family and friends, who sometimes tease him, have noted his progress. He believes he is making progress and intends to get the best out of life henceforth. His call is simple: the government should provide job opportunities for the youth and also compulsory education in order to curb drug and substance addiction. 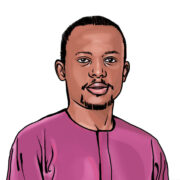