Children bear the physical and mental scars of the horrors and brutality of Nigeria’s  13-year-old insurgency in the northeast. One of them is 16-year-old Bakura, who was forced to flee his hometown of Saye in the Bama Local Government Area of central Borno.

Bukura always smiled and looked away whenever he attempted to answer my questions. He casually rubbed a scar on his leg, which appeared like a recent wound, and would occasionally stick his tongue out while talking.

His father was a bricklayer and a water vendor, working two jobs to provide for his family of six, while his mother was a housewife, taking care of them.

It was seven years ago when the family got displaced from Saye. His mother would later pass away after falling ill while searching for a safe haven. Nine years old at the time,  his tragedies would worsen after learning that his father was arrested by the soldiers and taken to the notorious Giwa barracks in Maiduguri, the state capital.

“We later heard that he was transferred to prison, where he died,” Bakura told me while looking away to avoid eye contact, probably because of the emotional trauma of the event.

It was common at the time for soldiers to conduct indiscriminate arrests, where they reportedly assembled residents and randomly selected persons suspected of association with the terror group, Boko Haram.

The same tactic was applied for people fleeing to safety, with the military arresting some of them under suspicion of involvement with Boko Haram. Unfortunately for Bakura, his father was a victim of this problematic counter-insurgency approach that has led to the detention of thousands of people in military and civilian facilities.

According to an Amnesty International report in 2015, the Nigerian military, often with the support of the Civilian Joint Task Force (CJTF), arbitrarily arrested at least 20,000 people. The organisation added that data collected suggests that since March 2011, more than 7,000 men and boys have died in detention, their deaths often unrecorded and almost never investigated.

HumAngle has previously reported on the horrors of detention and the systemic culture of arresting civilians, which also led to the formation of the Knifar movement by a group of displaced women to support each other and campaign for the release of their husbands from prison and military custody.

The insurgency has had a profound impact on many children due to the displacement of over two million people, separation of families, and deaths of parents, in addition to the insurgent attacks, abductions, and recruitment of child soldiers.

In 2017, the then Governor of Borno, Kashim Shettima, revealed that 52,311 children in the state were orphaned by the Boko Haram insurgency. He also disclosed that some 54,911 women became widows due to the crisis.

From Bama, Bakura would move into Dalori ward, near Maiduguri, where his mother’s only sister took him in. Life was okay, he said, until the discrimination started when he was referred to as the ‘son of a Boko Haram member’.

He would get beaten, and sometimes stones were thrown at him whenever he went out for errands. He would often stay home for weeks and refuse to go out, even with his cousins. Soon his aunt felt he was useless.

“I was sent away by my own blood,” Bakura said as he squeezed his eyelids to avoid a tear from dropping.

A few years later, he joined an Almajiri school in the Gwange area of the capital, where they taught students how to knit caps and sell them to feed themselves and meet other essential needs. Almajiri schools are a historic and controversial education system in the country’s north, with children learning Islamic education. However, the practice has become the subject of public scrutiny and calls for reforms due to the treatment and conditions of the children.

“There were times when we slept in the rain, when our Tsangaya [Almajiri school] was still under construction,” he said, folding a finished cap and picking another one that looked half-done. He usually finds something to distract himself when the conversation tilts towards emotional topics.

Bakura wants to be a soldier so badly if he gets the opportunity. He wants to avenge his parents who died because of Boko Haram. The teenager says he also wants a better country so that other people will not experience what happened to him.

“I wish this upon no one,” he said with a long face.

His dream to join the military faces a brick wall. “I have never set foot in a school environment before.” A secondary school certificate is the least requirement to join the junior cadre, while a tertiary education acquired through the university or the officer training academy is requisite to enlist through the officer cadre.

The education deficit is a significant problem exacerbated by the conflict. Since 2009, over 1,400 schools have been destroyed while 2,295 teachers have also been killed, according to the United Nations Children’s Fund.

In the absence of the desirable, Bakura says if he would accept any form of support from the government, perhaps towards opening a provision store.

“I really want to be a soldier,” he emphasised. 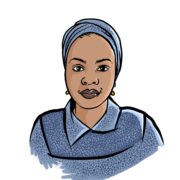