Farmers in Zamfara state, Northwest Nigeria, have cried out that terrorists have begun burning the crops of farmers who have refused to pay taxes to them.

Residents of Magami in the Gusau Local Government Area have expressed concern that the situation has exacerbated their fears of a Nigerian food crisis.

According to one resident who spoke to BBC Hausa Service, terrorists kidnap farmers who approach their farms and burn their produce if they refuse to pay taxes. “On Monday, they burned two farms to the ground,” he said.

However, the Zamfara Police Command stated that it was unaware of the incident because no one reported it.

According to the Zamfara Command Police Public Relations Officer,  Muhammed Shehu, “we have not received any report about the incident, and anyone who was affected should report it to security officers.”

However, one Almustapha Abdullahi, who posted pictures of his farm on Facebook, claimed that it was razed by terrorists.

“After leaving Gusau and returning to my home (Magami), I discovered that terrorists had come to my farm where I was growing maize, burned all the produce collected by the workers, and abducted the workers, mostly women and children,” Abdullahi wrote on Facebook. 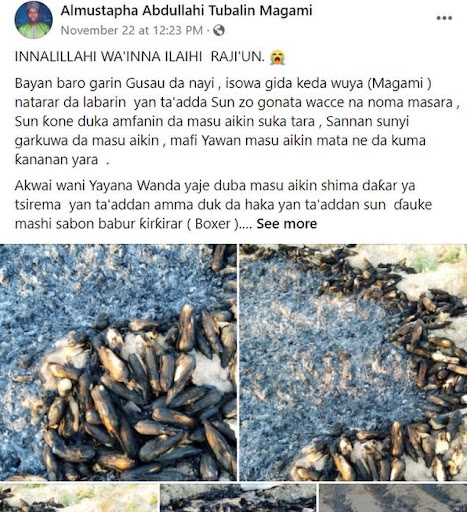 According to BBC Hausa, Magami residents have stated that terrorists continue to kidnap people despite the government’s promises to tackle insecurity.