In a recently released video titled “الجيل التمكين” (empowering generation), the Islamic State West Africa Province (ISWAP) has shown how it teaches children in their early teen ages extremist ideology and military skills to groom them for fighting.

The 27-minute-long propaganda video shows the young boys sitting on chairs in a room that appears to be like conventional classes with blackboards while their masked teacher takes them through lessons on Arabic grammar.

Another teacher was seen taking them through jihadi doctrines against democracy which they regard as “taghut” (satanic or ungodly). Speaking in Arabic, the teacher was shown explaining that submitting to parliamentary democracy is tantamount to supporting a system against God’s ruling.

“And among the tawaghits (plural of taghut) of this time that you must disbelieve in and, instead, believe in God, are the legislative and parliamentary councils,” the masked teacher said in Arabic.

“The legislative and parliamentary councils are enacting laws contrary to the rulings of Allah. The primary objective of the parliament is to make laws for people,” he continued.

Salafi-Jihadists consider democracy an alien and ungodly system and whoever participates in it is a “Mushrik” failing to observe divine rulings. According to them, any human law contrary to the Shari’a, is anti-Islamic, and should be violently eradicated.

Arabic is considered Muslim’s lingua franca and its study is particularly seen as important. What the ISWAP boys are learning from the Arabic class diverges from what is taught in regular schools in the area of doctrinal courses known as “Aqeedah,” as confirmed by one of the teachers shown in the video. The “Aqeedah” in this context means the Salafi-Jihadi doctrines, interpreted differently from mainstream Salafism.

Generally, analysts familiar with Jihadist operations focus on higher and primary sources of Jihadism, such as Ibn Taymiyyah’s works, Ibn Abdulwahab’s books, and Sayyed Qutb’s political theology, as the foundation of modern Jihadism. However, little consideration is given to what children learn under the jihadi system.

Jihadists have also appreciated the inadequacy of literature when it comes to the indoctrination of their young ones. Realising that the literature of jihadi scholars is often too esoteric for children, the Islamic State (IS) produced some works that are aimed at instilling the ideology of terror in the minds of younger members even before they grow up.

All Jihadists affiliated with the Islamic State rely on these works to design what their young ones will consume as they mature to join the next generation of fighters. The children receiving these indoctrination lessons are mostly the sons of the living and dead fighters or those boys who the terrorists captured.

According to Abdulbasit Kassim, PhD candidate at Rice University and a scholar on Boko Haram, the limited time to engage in scholarly activities due to the threat of attacks from the military made local Jihadists such as ISWAP members rely on IS literature as sources of knowledge or justification for certain activities.

This means that even though they did not mention the literature used, ISWAP teachers are likely to rely on the books and curriculum designed by the Islamic State and distributed via the internet, particularly their private Telegram Channels.

HumAngle found one of the books produced by the Islamic State for teaching students at a basic level. Titled “معلم الحروف” (Alphabets Teacher), the book is somewhat similar to the “trace and colour” ABC for pupils text, but it has instead focused on making weapons of warfare.

The book also includes Arabic alphabets and the words they can make, such as in “A” for “Apple” and “B” for “Ball”. The first Arabic letter “أ” (pronounced “Alif”) is used to make “أناناس” (ananas) which means pineapple.

The book, on the other hand, includes “د” for “دبابة” which means armoured tanker, “ص” for “صاروخ” which means a missile, and “غ” for “غواصة” which implies a submarine.

The inclusion of weapon and armoured vehicle names in the book is intended to familiarise the children with them before they grow up and join the next class of fighters.

Graffiti and drawings of guns and armoured tankers were seen on the walls of recaptured towns once held by Boko Haram, which may indicate what children saw and wished to have.

In a pamphlet titled “Teaching Children Monotheism,” the Islamic State has mentioned what children under its caliphate should learn in a “Question and Answer” style. The pamphlet was published by the “Maktabatul Himma,”  a central publication body of the Islamic State.

The book is intended for children in their early adolescence who are taught what to say when asked about their religious beliefs and ideologies. It cited classical Salafi scholars like Ibn Qayyem Aljauziy. 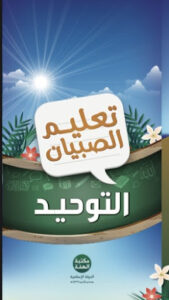 Photo: Cover of an Islamic State’s pamphlet with the title “Teaching Children Monotheism”.

The contents of the pamphlet are not dissimilar to what mainstream Salafi schools teach in their schools, with the exception of some terms that the Jihadists interpret too strictly or violently.

The anonymous author of the pamphlet states in the introduction that teaching children the doctrines is more important than teaching them Qur’an and its memorisation.

“With the exalted position of the Qur’an and the importance of teaching it, however, teaching children the foundation of doctrines should be the first in a proper way of training them,” the author wrote.

In an attempt to justify prioritising teaching Jihadist doctrines instead of the Qur’an, the author cited Muhammad Ibn Abdulwahab, who, he claimed, had written a letter on the subject.

Mainstream Muslim scholars argue that Jihadists and other violent extremists prioritise teaching their views to the Qur’an, demonstrating their deviation from the Qur’an’s teaching.

According to Mallam Balarabe Abdallah, an Islamic Studies scholar, extremists’ understanding of religion is bottom-up rather than top-down.

“They start with their own ideas and then try to find justification for them in the Qur’an or Hadith. Mainstream Muslims, on the other hand, read the Qur’an first and then form their opinions around it,” he explained.