The attack on the Northeastern town of Buni Yadi demonstrates the growing threat from ISWAP’s modification of battle trucks using captured armaments.

The pickup trucks are mounted with heavy machine guns such as the W85/NSV/ DShK/Type 85/dual KPV and other weapons, including the SPG-9 recoilless gun.

HumAngle had reported that the ISWAP incursion in the town led to fierce clashes between the insurgents and the military before the arrival of air support and subsequent withdrawal of the insurgents. 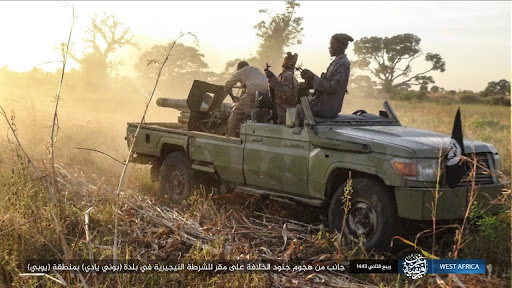 The images, which also showed the raid on a police facility in Buni Yadi, illustrate ISWAP’s truck modifications to support different calibres of weapons.

In November, ISWAP released images of the attack on the Damboa area of Borno state that included another pick-up truck fitted with cannon removed from a BMP-1 and an up-armoured improvised carrier.

Similarly, in November, Nigerian troops in Askira Uba captured an improvised carrier that looked similar to Damboa. The vehicle had an armour section from a previously captured Nigerian Army Panhard VBL Recce vehicle.

During the same month, ISWAP revealed an image of a 122mm D-30 howitzer mounted on a heavy-duty truck. The mobile artillery was reported to have been deployed against security forces positions.

In June, a distinct looking improvised armoured carrier built on presumably a light-truck chassis appeared in ISWAP photos, of an attack in the Gujba area of Yobe State.

The 122mm Grad rockets are usually employed on the BM-21 and the RM-70 multiple launch rocket system (MLRS) trucks in NA stock.