In the last two years, Nigeria has witnessed a spike in security challenges. Multiple attacks by terrorist groups, inter-ethnic clashes, kidnapping, and attacks on individuals and government establishments by alleged secessionists have all put the country and citizens on the edge.

Worried by the worsening security across the country,  state governors created regional security outfits – Amotekun in Southwest, Ebube Agu in the Southeast  and Shege-Ka-Fasa by the Coalition of Northern Group – to assist the government’s security agencies in combating these criminals.

However, insecurity in the country seems to be overwhelming the security agencies as more attacks are recorded daily. Despite this, the government, through its agencies, appears more determined to crush Nigerians who are protesting against insecurity, bad governance, and worsening standards of living across the country than clamping down on the criminals.

Between Aug. 2019 and June 2021, some major protests have been organised by different groups, to demand better governance, and restructuring among others. But in response, the government has through security agents clamped down on those protesters -leading to arrests and in some cases, killing of protesters.

In Aug. 2019, the Coalition for Revolution (CORE) organised a #RevolutionNow protest; to demand  good governance and improved wellbeing for Nigerians. The protest staged in different states including Lagos and Abuja was however disrupted by security agents who arrested and detained key organisers of the protest including a former presidential candidate, Omoyele Sowore.

They were alleged to have committed a treasonable felony in breach of section 516 of the Criminal Code Act by  staging “a revolution campaign aimed at removing the President and Commander-in-Chief of the Armed Forces of the Federal Republic of Nigeria.”

A year later, the group led another protest, demanding the reversal of “anti-people policies implemented by the President Muhammadu Buhari-led administration.” 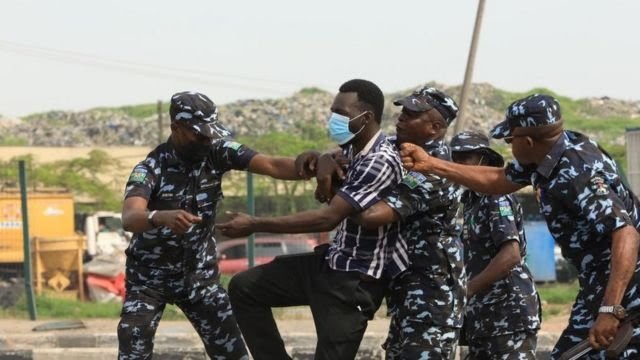 The protest was held simultaneously in Lagos, Ogun, Osun, Ondo states, and Abuja. But again, in Lagos and Abuja, security operatives dispersed demonstrators who were out for the movement.

A team of security operatives including the Department of State Services (DSS), Nigeria Police, and the Army, were reported to have arrested dozens of protesters from the scene of the protest.

Also, the #EndSARS protest, which was a movement against a series of police brutalities on Nigerian youths was met with force and brutality.  Nigerians were frustrated by the excesses of the now scrapped Special Anti-Robbery Squad (SARS) – a unit established to perform undercover duties against violent crimes.

#EndSARS protest that had started as an online campaign in 2016 would later attract global attention after a video showing a SARS police officer shooting a young Nigerian in front of Wetland Hotel, Ughelli, Delta State went viral on the internet in Oct. 2020.

Unlike before, the movement emboldened many who had been brutalised by the police to voice out and join the movement which climaxed on Oct. 20.

On Oct. 20, at the Lagos Lekki Toll Gate, the operatives of the Nigerian Army reportedly opened fire on those demanding an end to police brutality. There were reports that at least 50 persons were injured with several unidentified persons killed in what has been described as ‘Lekki Massacre’.  However, the Lagos State Government later reported that the shooting resulted in up to 25 injured, and only two dead.

But the decision of the Lagos State Government to restart operations in Lekki Toll Gate sparked an outcry and paved the way for another protest at the toll plaza.

Nigerian youths, who were not satisfied with the decision, called for another fresh protest on Feb. 13. However, armed security agencies reportedly arrested over 20 protesters at the scene and dispersed others with tear gas.

To show their grievances against the state of the nation, some aggrieved Nigerian youths had called for a nationwide demonstration against the government on June 12, which the government had declared as the country’s  Democracy Day.

Protesters who gathered at strategic places in over 15 states in Nigeria, were dispersed by security operatives– deployed to control alleged violence.

On July 3, agitators in Southwest states stormed the streets to demand a separate nation for the Yoruba ethnic group. The agitation was premised on rising insecurity in the region.

After the protesters ignored warnings by the government to suspend the planned action, armed police officers were deployed to disperse the protesters.

At least, 20 persons were reportedly arrested in Lagos while others were dispersed with tear gas and water cannons. However, a 14-year-old street trader was reportedly killed by a stray bullet allegedly fired by a police officer. The allegation has been denied by the Lagos State Police Command which  insisted that its officers did not fire live bullets.

Police are failing to respond to distress calls

Nigerians are used to the poor response of the Nigeria Police to distress calls during emergencies.  For instance, in Lagos State, Southwest Nigeria clashes among transport workers are recurrent but the Police often respond late or maintain a lukewarm posture.

Last May, commercial motorcycle operators and members of the National Union of Road Transport Workers (NURTW) engaged in a fight over toll collection. The ensuing fracas  threw residents and motorists into a pandemonium.  The fight which left many injured continued for hours before the Lagos Police command mobilised officers to quell it.

Activities of criminal herders in many parts of Nigeria are worrisome, and many Nigerians think that the security operatives are either overwhelmed by the challenge or just chose to look away while the criminals are attacking and pillaging.

For instance, HumAngle reported  how the Police failed to respond to the distress calls by residents of Igangan in the Southwest State of Oyo when they were attacked overnight by suspected criminal herders. At least 12 persons were killed during the attack and many properties were destroyed by the attackers.

HumAngle reported that the attack was repelled by local hunters and members of the O’dua Peoples Congress as the Police ignored distress calls from the community leaders.

Human right activist and lawyer, Festus Ogun said, “No right is complete in the absence of the right to fight for one’s right.”

Ogun cited the Nigerian Constitution as guaranteeing the right to assemble and also protest. “The right to protest is covered under Section 39 and 40 of the 1999 Constitution,” he said. “It should not be called a democracy where citizens are not allowed to express themselves freely in the form of protest and demonstration.”

He maintained that “Protesting is part and parcel of free speech. Denying citizens the inalienable right to protest is setting democracy on fire.”

Ogun added that there was no definite law to back up attacks of security operatives on protesters adding that, “any attempt to rationalise attacks of protesters will end in shame.”

“Officers of the Nigeria Police Force displayed unbridled recklessness against peaceful protesters and it is a shameful thing to see that an agency saddled with the responsibility of protecting human rights and the fundamental freedom of Nigerians have engaged in such abuse of power,” Taiwo Makanjuola, an associate with Citizens’ Gavel said.

Makanjuola said, “the ills that permeated the Nigeria Police Force such as brutality, indiscriminate killings, extortion, etc was what necessitated the protest, so to find protesters being brutalised, illegally shot at, and arrested for exercising their fundamental right is one which begs the question.”

“This attempt to gag the citizens through clampdowns are what are renewing violence agitations in Nigeria. For a democracy to thrive, dialogue must be a constant tool for managing differences and expectations. A citizen of Nigeria doesn’t need the approval of any governmental agency or public official to express their grievance. The right to protest is not a privilege.”

Also, Tope Temokun, a lawyer and activist, said, “If the people chose to be in street peacefully to protest against the killings in the land, the kidnappings, among other challenges of bad governance in the land, the only role the police would play as citizens in uniform is to be with the people, to march side by side the people, to ensure the there is no derailment to objectives of this justiable national outcry.”