A total of 540 men, including husbands of the Knifar women, have been released from the Mallam Sidi camp in Gombe State, northeastern Nigeria, where they have been held for the past nine months, after years spent in detention at the Borno Maximum-Security prison.

The men had been arrested and detained in 2015/2016 during the mass arrest carried out by the Nigerian army in Borno State at the peak of the Boko Haram insurgency, on allegations of being part of the terror group or having affiliations with them.

Their wives had come together in 2017 to form the Knifar movement, an advocacy group to advocate for the release of the men. Since 2021, significant numbers of their partners have gradually been regaining freedom in batches from different detention facilities. In July 2021, the Nigerian army announced that it was releasing 1,009 men who had been detained in a similar fashion, after clearing them of the suspicions, and emphasising that they were not “ex Boko Haram fighters”. It did not say whether they were adequately compensated.

Some of the detainees were released shortly after the announcement, especially those kept at the Giwa barracks detention centre. Among them, about 100 were identified as husbands of members of the women advocacy group. HumAngle reported the release of about hundreds more in November last year.

Several batches have been released since April 19, this year, totaling 540. It is unclear if the figure includes Boko Haram deserters, or if more people outside the initially cleared 1,009 were transferred to the Malam Sidi camp in Gombe.

The recently released men had spent about nine months in Giwa barracks, a notorious military detention facility, and then transferred to the Borno Maximum-security prison where they spent about five years. While some of them were cleared of wrongdoing from there and released last year, others were transferred to the Mallam Sidi camp in Gombe State to undergo the deradicalisation programme (codenamed Operation Safe Corridor) for Boko Haram defectors, even as they insisted they were not terrorists. The admission process into the camp has been criticised by researchers, including The International Crisis Group which noted in a report that authorities needed to improve admission procedures in order to filter out innocent civilians.

The women have complained before about this negatively impacting the psyche of their children as they get mocked by their mates who tell them their fathers are Boko Haram members because they have been “taken to Gombe.”

“You will see children in this camp telling other children that their father is Boko Haram because they took him to Gombe. The stigma and disgust are worse for the men who are taken to Gombe,” Yakura Kumshe, one of the IDPs told HumAngle last year.

According to the recently released men, while the programme promised at the beginning that they would be equipped with capital to start a business or with facilities to make use of and commercialise the skills they would learn, they were merely given the sum of ₦10,000. Some told HumAngle they were lucky enough to be given sewing machines. However, the machines were often incomplete, with certain parts missing. There were others who received neither the machines nor money.

“When we started the programme, they told me that they would give me capital that would be enough for me to start a business that would benefit me and my grandchildren when I eventually get them. I was happy,” one of the men told HumAngle.

At the completion of the programme, he was handed ₦10,000 and an incomplete set of a sewing machine, he says. He used the money to transport himself back home from the centre, and continues to stare at the machine in his tent with no idea how to proceed.

The Knifar women say they are overjoyed at the recent releases, but continue to appeal to authorities to release the rest of the men.

“There are thousands who are still in detention.” 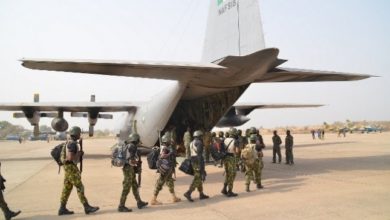 North Central, Most Unsafe Region For Journalists In Nigeria – PTCIJ

Factcheck: Special ‘COVID Vaccine’ Not Made To Experiment On Africans