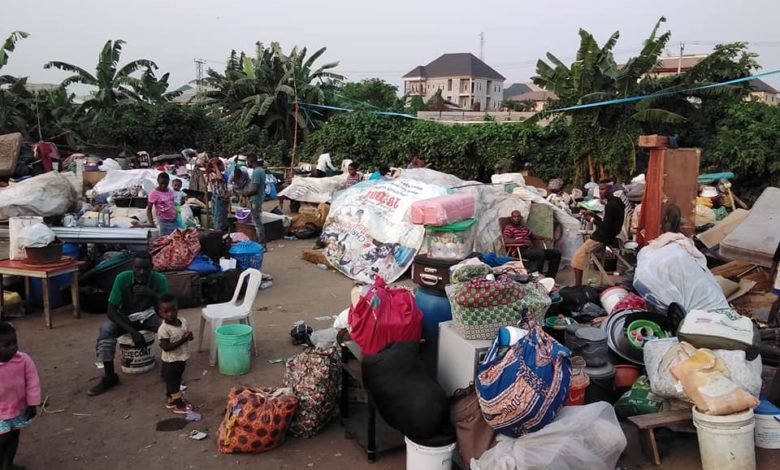 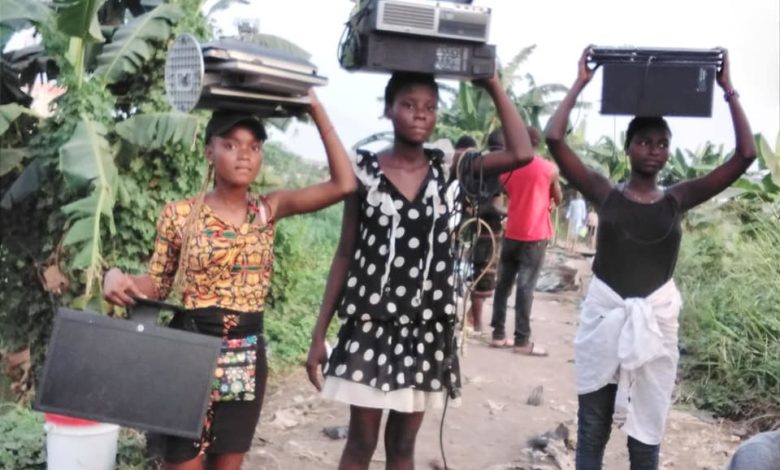 “On Thursday, Dec. 31, 2020, we saw some government officials who were in the Lagos State Task Force uniform in company with some representatives of the Ministry of Environment and some armed forces members coming into our community with big bulldozers.

“The team made a stop at the mechanical shop that leads into our community to have a conversation with the workers. We noticed the rancour but cared less since we were not included in their discussion,” Ruben Nosike, a resident of Monkey Village, narrated about the incident.

“Before this time there had been unresolved issues on land ownership with those mechanics but our community was never involved. So when the officials came, after the discussion with the mechanics, they fired up their machines and started pulling everything down.

“We were shocked to see the machine head towards our community and start pulling down our house. We were not given any prior information or notice before the demolition.

“We even requested that we move, at least, some of our stuff but they just continued pulling down our houses, shops and all buildings in our community,” Nosike said.

His account was not different from Adeshewa Owolade’s, who works as a hair stylist and caterer in the community.

“My shop and house were destroyed. I could not take anything away. I was absorbed by CEE-HOPE with some people to live in a house since we have nowhere to go. We are about 15 here, trying to survive,” she said. The Demolition of Monkey Village

Several reports said officials of the Lagos State Government demolished property in Monkey Village, located behind Opebi road in Ikeja District and displaced over 400 residents who had inhabited the shanty community for years.

While no lives were lost, property worth millions as well as projects established by a non-governmental organisation, CEE-HOPE, were demolished.

When contacted at first, the Lagos State Task Force on Environmental and Special Offences (Enforcement) Unit, in a statement, denied involvement in the action.

The Public Relations Officer of the agency, Adebayo Taofiq, said: “It is imperative to state categorically that the operatives of the agency were not in any way involved in the said demolition as being circulated.”

However, in a contradictory statement later, the ministry accepted responsibility for the demolition. It said  ‘reclamation of the wetland’ was the reason for the eviction of the residents.

The Tussle for Land Ownership

While many hundreds are left homeless, there has been a contest between two families over the ownership of a property, No. 1, Folorunsho Kuku Street, off Opebi Village, Ikeja — behind which residents of Monkey village lived.

Reacting to the demolition, Monday Ubani, a lawyer, stated that the property of one of his clients located at Opebi area of Lagos, allegedly invaded by a property developer, Abiodun Ariori, and some Lagos State Government Task Force officials, was not part of disputed Monkey Village.

Ubani, a former second Vice-President of Nigerian Bar Association, said, “I have seen the reaction of the Meadow Family to my statement in which I specifically alleged that the family got the Lagos State entangled in this messy land scandal wrongly and glad to note that the family’s reaction confirmed my allegation.

“It is very alarming that the Lagos State Government fell into this mess by listening to this family that has no basis both in law and logic to do what they did over this land matter.

“Our client’s land is not Monkey Village land but ours is situated, lying and being at No  1 Folorunsho Kuku Street, Opebi Village. It is fenced with a gate and tenants therein covered by a Certificate of Occupancy obtained since 1989.”

In a separate reaction, an engineer, Abiodun Ariori, disparaged allegations by Ubani that he acted illegally while recovering landed property in Ikeja area of Lagos.

Ariori said, “We’ve been in possession of the land (Opebi) for more than 20 years. About six months ago, we were trying to erect some structures on the land when we found out that some mechanics had taken over the place and we reported them to Zone II (Police Command) of which they were all arrested.

“That is when we met lawyer Ubani, who came to facilitate their bail and ordered them back to our land that has the Supreme Court verdict backing us. Since we’ve been trying to work on that land, he (lawyer Ubani) has been using the police to frustrate our efforts.”

Among several properties lost in the demolition were two projects established by a non-governmental organisation, Centre for Children’s Health Education, Orientation and Protection (CEE-HOPE), to support the community.

CEE-HOPE had established an equipped ICT Centre and youth hub with laptops and library to support the education of children and youth as well as a water project in the community.

The Executive Director of the group, Betty Abah, faulted the actions of the government and said that “Monkey Village was never part of the contested land.

“The village sits on about 10 plots of land belonging to several individuals. It’s obvious that some powerful force is on a land-grabbing mission and utilises the apparatus of the government of the day. Suppose their reasons were cogent, why would they not give the legal and mandatory prior notice before the forced eviction?”

The organisation subsequently issued a statement demanding: “An apology to the community members for the gross violation of their rights, including the failure to follow due process by duly serving them formal notice; compensation of everyone of the community members for lost personal and household belongings; a relocation of the victims of this arbitrary forced eviction as guaranteed by the UN provision on Housing Right; Compensation of CEE-HOPE for the complete destruction of its multi-million naira ICT Centre/Youth Hub in the community and water project; and a promise by the government to end all such arbitrary actions, especially with regard to the urban poor in future engagements, commit to meaningful engagement of informal housing residents rather than the usual use of brute force, commit to the upgrading of such settlements as is the current practice across the world rather than forced eviction which pushes the poor into worse levels of vulnerability.” Meanwhile, at the community, a wooden fence has been erected to prevent entry into the land. Some helpless residents have pulled up smaller tents as shelter, while they lookout for means to survive.

Betty Abah, Executive Director of CEE HOPE, said: “As we speak, many families are still in the open, displaced, helpless and hopeless and we are talking about the prevalence of a major pandemic.

“We have had to move some families to shelter and some of the children moved to my house, including orphans, but of course, our resources cannot go round 400-strong community members. It is quite a pathetic reality.”

Nosike also confirmed that some residents had been absorbed by their religious groups, NGOs and family members but others were still outside the village.

However, Abah pointed out that none of the demands of the people had been met by the government and no contact made with the displaced families.