Since the emergence of Boko Haram over a decade ago, along with the inception of other terror groups, Nigerians have been through a roller-coaster of emotions. The security challenges, according to the International Organisation for Migration (IOM) report, have displaced over two million people in the northeastern part of Nigeria.

HumAngle in an earlier analysis also reported that some parts of the country have been taken over by non-state actors who have wreaked havoc on the educational system and other activities in Northwest, Northeast and North-Central Nigeria.

In the Southeast, HumAngle uncovered how members of the proscribed separatist group, Indigenous People of Biafra (IPOB), kill those disobeying their sit-at-home curfew. Unfortunately, the situation is not different in the Southwest and South-South.

As these problems affect the larger economic, political, and social patterns of the society, many religious and political leaders in the country are encouraging citizens to take prayers seriously.

Governor of Zamfara state, Bello Matawalle, in September urged Nigerians to intensify prayers for God’s intervention. His colleague in Ogun State, Dapo Abiodun, said in April that Nigerians should not be discouraged by the prevailing security challenges confronting the nation, instead they should be steadfast in praying for a turnaround.

Seven months ago, the Chairman of the Nigerian Governors’ Forum and Governor of Ekiti State, Kayode Fayemi, also maintained the position that Nigeria needs more prayers to tackle security issues in the country.

In 2016, wife of Lagos State governor, Bolanle Ambode, identified prayer as the key to solving the sundry challenges confronting the nation.

A former Nigerian Head of State, Gen. Yakubu Gowon (rtd), in 2016, described prayer as a formidable weapon that can solve the nation’s many challenges. He said it can solve the security problems faster than soldiers.

Nigeria’s Senate President, Ahmed Lawan also believes that calling on God is all that needs to be done to tackle insecurity, unemployment, inflation, and other problems.

“Today, we face serious security challenges. Where we have security agencies, which are mandated to ensure that we are secured and protected, if nothing, we should pray for them that they are able to perform well,” he once said.

Aside from political leaders, religious and traditional leaders have also encouraged citizens to embrace God in order to solve security challenges.

A compilation of Pew Research Centre surveys conducted between 2008 and 2017, which revealed the prayer routines of countries across the globe, named Nigerians as the most prayerful people in the world.

The statistics published by the centre in 2019, said Nigeria emerged as the most prayerful nation in the world with 95% of respondents saying they pray daily. 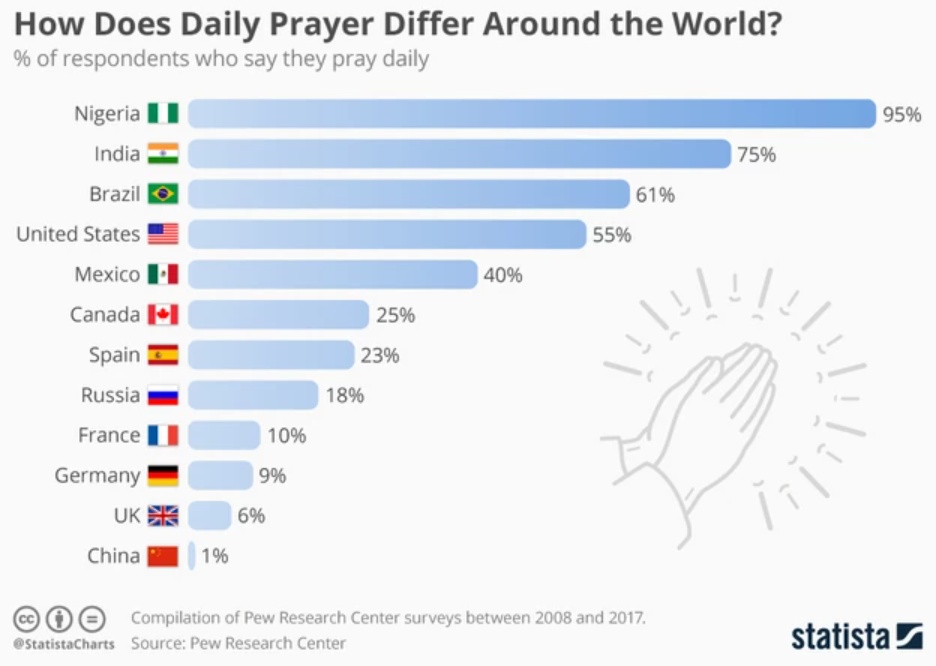 But is prayer the solution?

According to Tope Fasua, a Nigerian businessman and 2019 Presidential candidate for Abundant Nigeria Renewal Party (ANRP), prayers after killings and destruction of homes cannot help the country.

“I am not opposed to prayers. Like most people, I have reached critical junctures in life at which I had no recourse than to go on my knees and pray fervently. However, I do not know of any modern state that successfully dealt with insecurity by asking people to pray,” he argued in one of his articles.

“Humans have developed capacities to tackle many problems. Insecurity is within our domain of solvability. Insecurity in Katsina and the whole of Nigeria is a routine manifestation of the kind of society we have built. It is not an otherworldly problem; it is a problem imminent in social organisation. Consequently, we cannot outsource to God the consequences of basic incompetence, mental laziness and the lack of vision,” Fasua said.

Chairman, Independent Corrupt Practices and Other Related Offences Commission (ICPC), Bolaji Owasanoye, said in May that corruption is the most potent factor responsible for national security challenges in the country today.

“Corruption is Nigeria’s greatest challenge and a singular push factor of national security challenges, the expansion of poverty, the reduction of life expectancy, the high mortality rate we suffer, and the deteriorated livelihood experienced by our citizens.

“Through legislation, appropriation, investigation, oversight, and the scrutiny of public accounts, the legislature implements a very crucial fundamental objective in fighting corruption of power and also by doing so, it prevents the drift into the kind of insecurity that we have found ourselves in,” he said.

While security experts believe that the police need a total reform, the army on the other hand is in dire need of modern military hardware. The funds that should cater for these are most times mismanaged.

There has also been controversy about the security vote by state governors for which public affairs analysts said there is no accountability for. The billions which are allocated monthly to the 36 states of the country have no regulatory or monitoring agency to which the leaders are accountable as regards spending.

“With corrupt leaders, the country may be said to be giving security agencies, especially the military, an impossible job. Nigeria is a deeply religious country but it does not conform with biblical or Quran principles,” said Saheed Adio, an Islamic cleric.

Nigerians are being killed and displaced on a daily basis by non-state actors. The continued failure of the authorities in protecting the lives of Nigerians need more than spiritual intervention but effective action on the part of the government.