The footage of the helicopter landing in a field was shared across social media platforms including WhatsApp, Facebook, the microblogging site Twitter, and Nairaland, with descriptions claiming the rotary-wing aircraft was supplying materials to an armed group known locally as bandits.

Over the past few years, Nigeria’s Northwest has been battling escalating violence due to the activities of these groups, notorious for moving around in motorcycles and terrorising communities and commuters.

A tweet on the video shared by Standard Observers (@Standardobserve), which describes itself as a newspaper, had over 8,800 views as of Thursday and nearly 500 retweets.

The helicopter in the video is not common in Nigeria and bears resemblance with the  MBB-Kawasaki BK 117 medium utility–transport helicopter.

According to a statement by the conservation nonprofit organisation, African Parks, the video circulating showed the organisation’s helicopter conducting a routine resupply mission on Dec. 4, in Chinko, Central African Republic.

The helicopter was transporting transhumance sensitisation teams and their supplies within the park.

Conspiracies and fake stories on helicopters supplying armed groups are common in Nigeria. HumAngle has earlier on  fact-checked one video that was claimed to show a jet smuggling arms and drugs to criminals in Zamfara and traced it instead to Guatemala.

In January, the Kaduna State Commissioner of Internal Security and Home Affairs, Samuel Aruwan, debunked the claim of helicopters supplying arms to violent groups in the northwestern state.

In March, the regional group, Arewa Consultative Forum (ACF), was said to have appealed to the Government to extend its earlier “no-fly zone” directive in Zamfara to other states such as Benue, Taraba, and Borno, stating there were rumours that helicopters frequently dropped arms for bandits and insurgents.

Suspicions arose and conspiracies began to fly in June after the video of a government-owned helicopter conducting an exercise in a bushy terrain was uploaded online.

In July, it was reported that a Federal High Court in Nigeria’s north-central Niger state had remanded two persons accused of disseminating information on social media linking the country’s former Head of State, General Abdulsalam Abubakar, with a helicopter suspected to be supplying arms. 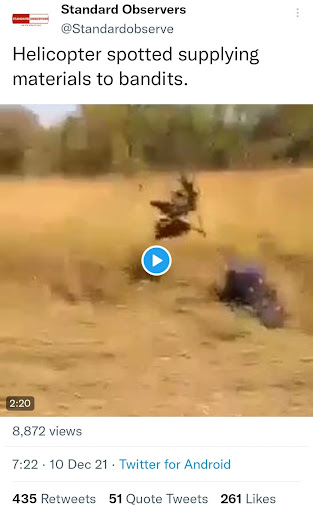 The helicopter was one of the AW109 purchased for the Nigerian Maritime Administration and Safety Agency, NIMASA, Deep Blue maritime security project.

The Senior Special Assistant to the President on Media and Publicity, Mallam Garba Shehu, was quoted to have said, “There’s this suspicion that the helicopters that foray into the mining areas are not purely for the purposes of serving miners and that some of the flights are being used to ferry food and other logistics to the bandits in the forests and that these logistics include weaponry.”

Bello Matawalle, the Governor of Zamfara State, faulted the no-fly zone, arguing to his colleague, chairman of the Nigerian Governors Forum, Kayode Fayemi, that it seemed “the security council doesn’t understand the nature of the security problems in Zamfara state but if they decided to take such action, let them go ahead.”

The Boko Haram insurgency in the country’s Northeast and neighbouring Lake Chad Basin has had its share of stories linking aircraft movement with weapon and logistics supply.

In 2014, a Nigerian government official discredited the story that Boko Haram insurgents were ferried in by helicopters along with their weapons.