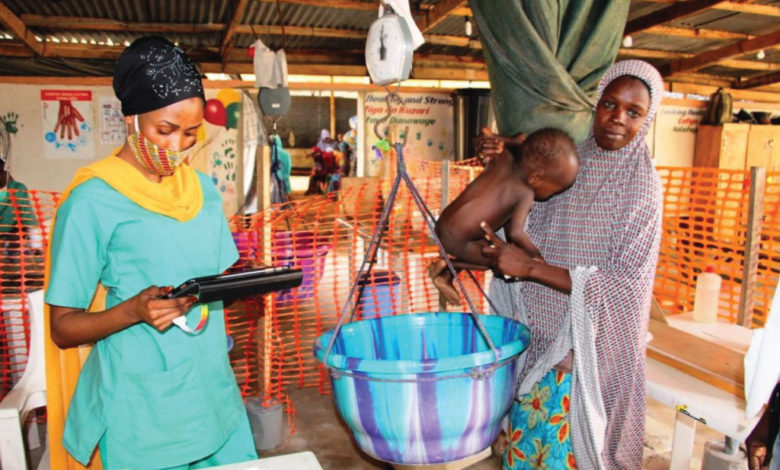 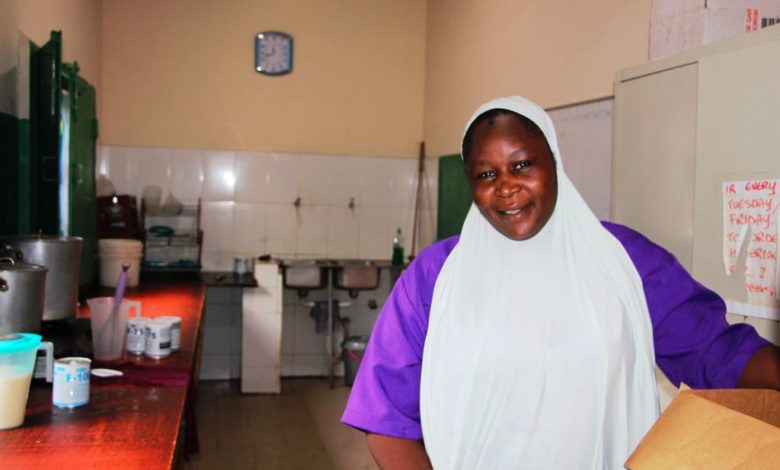 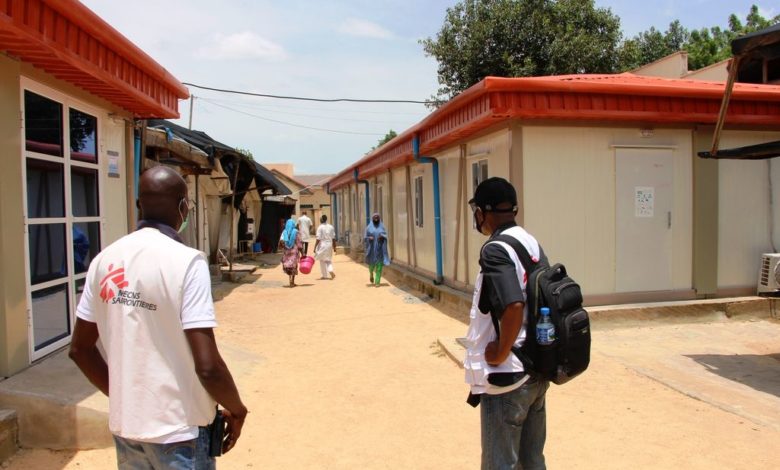 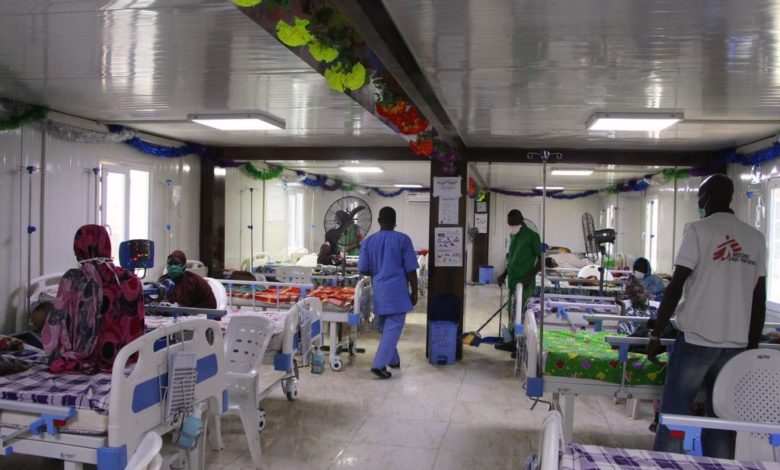 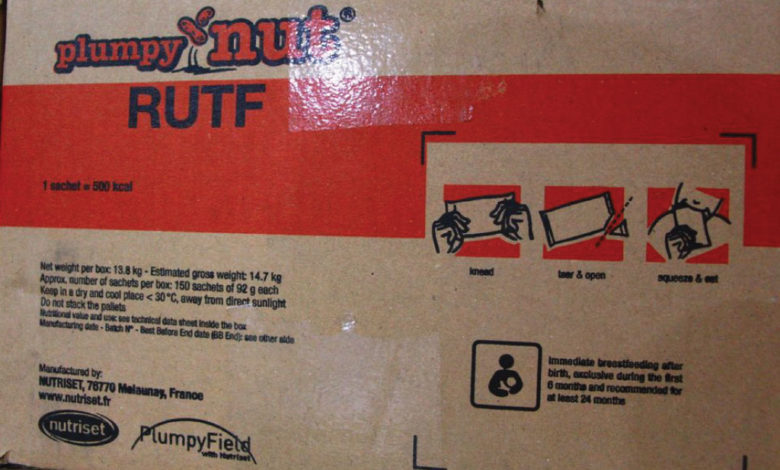 The international humanitarian organisation, Medicine San Frontieres (MSF), also known as Doctors Without Borders, has intensified its intervention in Borno State, Northeast Nigeria where children affected by the insurgency are dying of malnutrition.

The organisation is currently using its 100- beds, hospital in Fori to attend to children affected by the insurgency. In a recent information released, MSF said more than 260 children are screened daily for Malnutrition.

The facility treats malnourished under ten-year children and provides health education to mothers on nutrition and post-natal hygiene.

It said 57,000 portions of Plumpy’nut were delivered to malnourished children in August at its hospital while it also prepares and delivers 57.6 litres of special milk every day.
Plumpy’nut consists of vegetable fat, peanut butter, skimmed milk powder, lactoserum, maltodextrin, sugar, and mineral and vitamin complex.

Pierre Dianzenza, a medic with MSF told HumAngle that its interventions and concern were to see that the level of malnutrition is reduced to the bearest minimum.

He said the organisation aims to see that MSF has achieved all their desired goals to reduce malnutrition in the state among children affected by the insurgency.

Dianzenza disclosed that the health facility comprises a therapeutic feeding centre, which is used to stabilise the level of malnutrition in children by following the stages of test and result from the analysis.

Data made available by the humanitarian organisation shows that a total of 4022 children were screened, but only 743 were admitted while mortality has also increased. Since January when four mortality cases were recorded for August. In July, 20 children died, and 21 were recorded in August while it has been just one case in February and eight in May and June respectively. Three in March and 10 in April.

The MSF said all the deceased children were six months old and above, while the primary cause of death remains sepsis with 61.9 percent of the patients.

According to Mayo Clinic, sepsis is common among pregnant women, older people and children younger than one.

The data revealed that 57.1 percent of children died in less than 48hours, the longest killed after 12 days of complications of probable pulmonary tuberculosis.

It further stated that three children died of sepsis due to traditional medicine intoxication while one died of the suspected surgical abdomen.

Screening of children increased from 1327 children from January to 4022 in August.

Dianzenza says screening of children becomes paramount as the country continues to battle with COVID-19 pandemic.

“One of the challenges faced by the facility is that of the language barrier most times when people come from different destinations,” he said.

He, however, emphasises improved awareness among mothers to reduce child mortality.

Most of the children, Dianzenza disclosed, are usually brought to the facility after suffering for a long time. This, he said, accounts for the high mortality rate.

At the IUC centre, Dr Pourbarm Chairlyn explained that most of the children are dying of malnutrition and mostly die before 48 hours of their arrival at the hospital.

“We have records of success stories of treated malnourished children because only 5 percent of the children have died since January to date,” she said.

Stephen Pancha, the nurse in charge of the children’s ward, explained that the few challenges faced by that facility are training the beneficiaries on hygiene and other related issues.

Sheriff Zara from Dalori expressed appreciation to MSF and staff for coming to their aid.

“I have learned much, we usually take paraphilic food for sale in markets not knowing it will be of importance to our children,” said Zara, who has a five-month-old baby.

Ahmed Hauwa from Khaddamari said that the facility has helped her to know the right type of food to be given to a baby who is malnourished.

Bintu Mohammed, the mother of Hauwa who died as a result of delivery complications, was at the facility to be trained on how she can breastfeed her granddaughter who happens to be a three-month-old orphan.

She equally appreciated the efforts of MSF “saying we could have been at home suffering by now.” 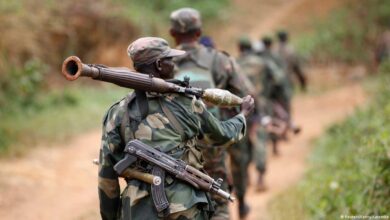 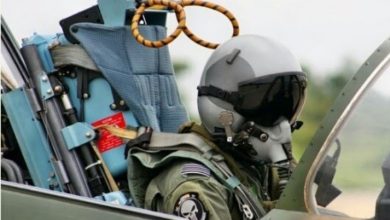 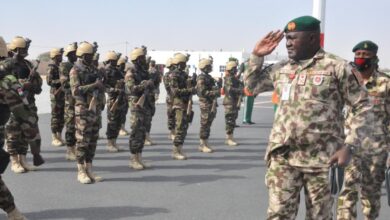 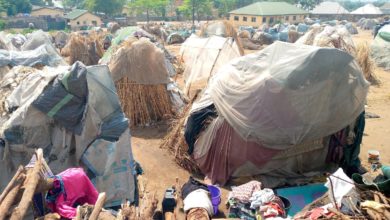 Inside Benue IDP Camp Where Mosquito Net ‘Cave’ Is Home