Fishermen are prone to telling tall stories about their catches. There was always a much bigger one that got away, and they always claimed to know the secret spots where all the fish were hiding.

But at the moment, those fishing in Lake Chad are boasting of bumper catches, and the insurgent groups are quick to say that this is evidence God smiles on their actions in the region.

Apart from the inherent dangers involved, fishing in the Lake Chad basin is one of the most productive things to do now, especially in the past two years; fish are easily caught in large numbers almost everywhere in the Lake’s basin.

Fishers who brave the dangerous waters even say the fish are so many; during the quiet of the night, it is easy to hear the rasping sound of them stridulating their overgrown fins, even from a distance.

“Before now, it required days and nights of tedious expeditions and casting of the fishing nets to make big catches on Lake Chad,” said Idris Sani, a 55-year-old returnee IDP in Kukawa, an ancient town of Borno state, Northeast Nigeria.

“But today, even the most shallow parts of the waters are filled with big fishes.”

Though the fish “are everywhere,” Sani says access to them is strictly limited because most fishing territories are under the control of terrorists.

“We do not only require permission from Boko Haram before embarking on any fishing expedition; we also have to pay fees and taxes on every catch we make,” he said.

“The entire Tapkin Chadi, where most of the fishes abound, are under the control of the ISWAP, who govern the islands and their surrounding waters.”

Sani said they had to summon the courage to go back to the fishing islands of the Lake Chad basin after the ISWAP terrorists had assured them of safety as long as they promised allegiance and paid the demanded taxes and levies to their ‘government.’

“They are the lords of the island. If you abide by their rules, you have nothing to fear; but if they catch you smoking cigarettes, you will be whipped with 40 lashes. If they catch you using mobile phones, they will kill you instantly because they think you are an informant. But as long as you don’t violate their rules and you pay the levies, the waters are yours to explore.”

HumAngle had published reports on how farmers and fishermen pay charged levies or four per cent of their harvests as commodity tax to ISWAP to access farmlands and fishing waters of Lake Chad.

The insurgents are not only advancing economic gains of the resources on the lands and waters they control, but they are also persuading the civil populace to believe that “their land” is now filled with abundant food resources because “God is pleased” with their kind of Da’awah (evangelism), compared to the harsh economic situations facing people in other parts of the country which they refer to as “sinful” Nigeria.

A trending video clip shows a local woman celebrating a massive catch of fish that filled up her pushcart.

In that viral video, the yet unidentified local woman speaking in Kanuri, the primary spoken language of Lake Chad, saying that she could sell each of the big fish for as low as ₦50 (10 Cents) because they are now everywhere.”

The woman’s video caught the attention of many people as it trended on social media because the size of fish she had in her cart can be sold for ₦1500 ($3.3) as roasted fish in Maiduguri.

It seemed that this (ISWAP’s) kind of manna-from-heaven propaganda might also be a strategy the insurgents deploy to achieve their goals, sustaining the loyalty of their foot soldiers and deepening their dogma. The allegiance of the locals within their controlled territories needs to be maintained. They seek to establish some authority and control over the general areas and their aquatic resources.

This claim may have paid off for the terrorist group, who usually take advantage of the prevailing chasm of illiteracy and poor exposure in the vast areas of the Lake Chad basin.

Scientists, however, take a more rational view. The basic principle is simple, says Professor Abbas Mohammed of the University of Maiduguri; “The more the water, the more the fish.”

The torrential rainfall experienced in the last two rainy seasons has increased the depth of the lake and the rivers and wetlands across the region.

“Most communities have had enough water,” said Professor Mohammed, “people don’t need to migrate to distant locations to fish. That is why even around Maiduguri here, at Alau community, there were reports of bumper fish harvest by fishermen.”

“What we must understand is that even if it is your fishing pond that you leave unharvested, the fish there will continue to grow bigger and bigger,” Professor Mohammed said.

The lack of people doing things other than fishing also contributes to the present abundance of fish, experts say. The water level is influenced not only by how much rain flows through the watershed but also by how much sediment that water carries on its way.

Fewer people walking on the shore, or tilling fields that run alongside tributary rivers, means less soil going into the water. In normal years, activity increases the amount of sediment flowing into the lake. The lake gets more water with little residue when there has been less activity due to people displaced by violent conflict. The lake will become more profound, meaning more fish.

Professor Mohammed Diyaware of the University of Maiduguri says: “When the constant human and animal movement around a lake or river results in  raising of particles which over time would settle on the Lake and gradually accumulate sand under the water and eventually make the Lake shallow.”

HumAngle further learned that due to the sacking of villages and the flight of residents from their ancestral abodes, many places have seen trees and other vegetation grow, which affects the amount of water evaporating from the lake and its tributaries.

Professor Diyaware said: “In the past, people cut away these trees to build houses, construct boats, smoke fish, and so on. But in the past nearly ten years now, this negative deforestation has not been happening, which has also impacted the preservation of the water from evaporating quickly. The fish will keep on multiplying as they keep on breeding during these years of insurgency.”

The fish population has also benefited from the type of fishing that has stopped. As the number of active fishing boats has decreased, techniques used to increase the catch have changed.

With fish in such large numbers, they are practically leaping into boats, and “obnoxious fishing,” using chemicals to force the fish to the surface, has ceased. The practice of Dumba fishing – staking nets out in the lake’s bottlenecks where fish have to move– has also reduced as the fishermen who introduced it have largely gone.

But all of these factors contributing to a larger fish population this year should be seen in the broader context of pressure on fish populations due to climate change and human activity, the scientists say.

The United Nations Water for Life program once cautioned that the drying up of the lake could cause “the more than 30 million people living in the Lake Chad region to aggressively compete for scarce water and land, which could lead to migration and conflicts.”

In recent years, fish production in the Lake Chad basin “has recorded a 60 per cent decline, while pasturelands have been degraded, resulting in a shortage of animal feed, livestock, and biodiversity.”

Before now, climate change and human interference have been fingered as the major causes of the drying up of Lake Chad, which had also impacted both the land and aquatic ecosystems of the Lake. One of the deeper causes of the ongoing conflict has been the struggle over the lake’s resources.

The fish in Lake Chad has become abundant at a time when large portions of the area have been deserted due to the violence. If everyone in the region accepted the propaganda and returned to share in the bountiful fish catches, the same factors would return, and the fish would become scarcer again.

Professor Mohammed said: “The insurgents can make such wild claims because the populace has little or no knowledge about how the climate or their long absence around the sources of fishing has impacted the ecosystem.

“People should not be misled about this because the essential fact about the situation in Lake Chad is that activity there is being influenced by the forces of climate change and human activities.

He points out another aspect, the bumper crop in the viral clip of the fisherwoman selling her catch is made up of a  lot of tilapia. This species is frequently abundant during periods of rainwater flooding.

“When torrential rain leads to flooding, some fish, like the Catfish, for example,  usually swim against the current. Their instinct tells them the direction where the water gushes from is shallow, and they swim toward the shallows to deposit their eggs.

He said one could best measure the fundamental health of Lake Chad’s ecosystem by studying the shallow basin, where most fish find it safer to remain there to reproduce. 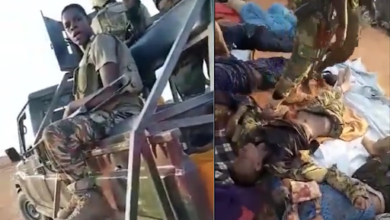