Eight state governors from the five countries sharing the border with the Lake Chad basin met in Cameroon on Monday, Oct. 4 to discuss issues about regional security cooperation.

The eight governors met in Yaounde, the Cameroonian capital, where they brainstormed for two days on how to chart a path to improved stability within the Chad basin.

A statement from Yaounde said, “Borno State Governor, Babagana Umara Zulum, alongside seven other governors within the Lake Chad Basin, on Monday, met in Yaounde, Cameroon, to discuss regional security cooperation and a path to improve stability.”

The statement which was signed by Isa Gusau, a spokesman to Zulum, said six governors including governor Zulum from Borno, Issa Lamine of Diffa in the Niger Republic, Midjiyawa Bakari of Far North of Cameroon, Abate Edii Jean from North Region of Cameroon, Mahamat Fadoul Mackaye from Lac Province of Chad and Amina Kodjyana Agnes – Hadjer Lami also from Chad, as well as Governors of Adamawa and Yobe States in northeast Nigeria, were all in attendance. 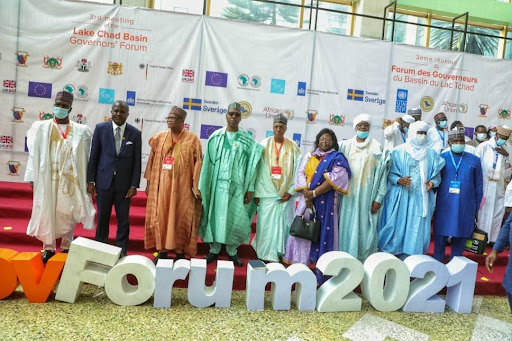 The meeting, according to the statement, “was organised by the Lake Chad Basin Commission, with technical support from the African Union, United Nations Development Programme and Crisis Management Initiative,” while the Cameroonian Government hosted the meeting together with the Lake Chad Governors’ Forum.

Cameroonian Prime Minister, Joseph  Ngute, declared the meeting open, as participants brainstormed on “security issues with a focus on terror attacks and humanitarian impacts in the region.”

The governors and other stakeholders had also “reviewed the implementation of strategies for regional stabilisation, which were adopted in 2019, during a similar meeting in Niamey, Niger Republic.”

Governor Zulum presented Borno’s position with a call on the need “to drastically increase the level of trans border alliance on security before strategic and territorial action plans can work.”

The statement said Governor Zulum conveyed his “great concern over the non-utilisation of Lake Chad Basin’s shore which he noted can provide huge economic potential to benefit the people of the region.”

“Already, Borno Government is making effort, towards establishing free trade zones in Banki town Bama LGA, Gamboru in Ngala, Baga in Kukawa and Damasak in Mobbar LGA, all in Borno State, to enhance socio-economic activities within the Lake region in line with territorial action plans for stabilization.”

He implored member states “to engage in identifying and addressing root causes of the Boko Haram crisis, and combine measures other than military operations.”