At least 404 human fatalities have been recorded due to the violence that occurred across Nigeria in November 2021, a report by Beacon Consulting, an Abuja-based security firm, revealed.

The firm, on Thursday, Dec. 9, 2021, debuted its maiden monthly report tagged ‘Nigeria Security Report’, which detailed the series of security challenges and latent conflicts that rage on.

According to the 15-page report, about 115 violent events occurred in 28 states of the federation, in which 404 fatalities were recorded, and 363 persons were abducted.

The report said 115 out of the 774  local government areas of Nigeria recorded such violence.

It also showed that Northwest Nigeria led the number of violent events with 204 cases of kidnapping and 163 recorded deaths.

Southeast Nigeria, where the actions of IPOB had nearly grounded socio-economic activities, recorded only one incident of kidnapping and 36 deaths. In Southwest Nigeria, three abduction cases and 13 deaths were recorded as a result of “political violence, violent attacks on financial institutions and kidnappings.”

Despite the high number of fatalities said to be recorded in November 2021, the figures, according to the report, “represented a 41% reduction in fatalities and a 38% increase in abduction” compared to past cases. 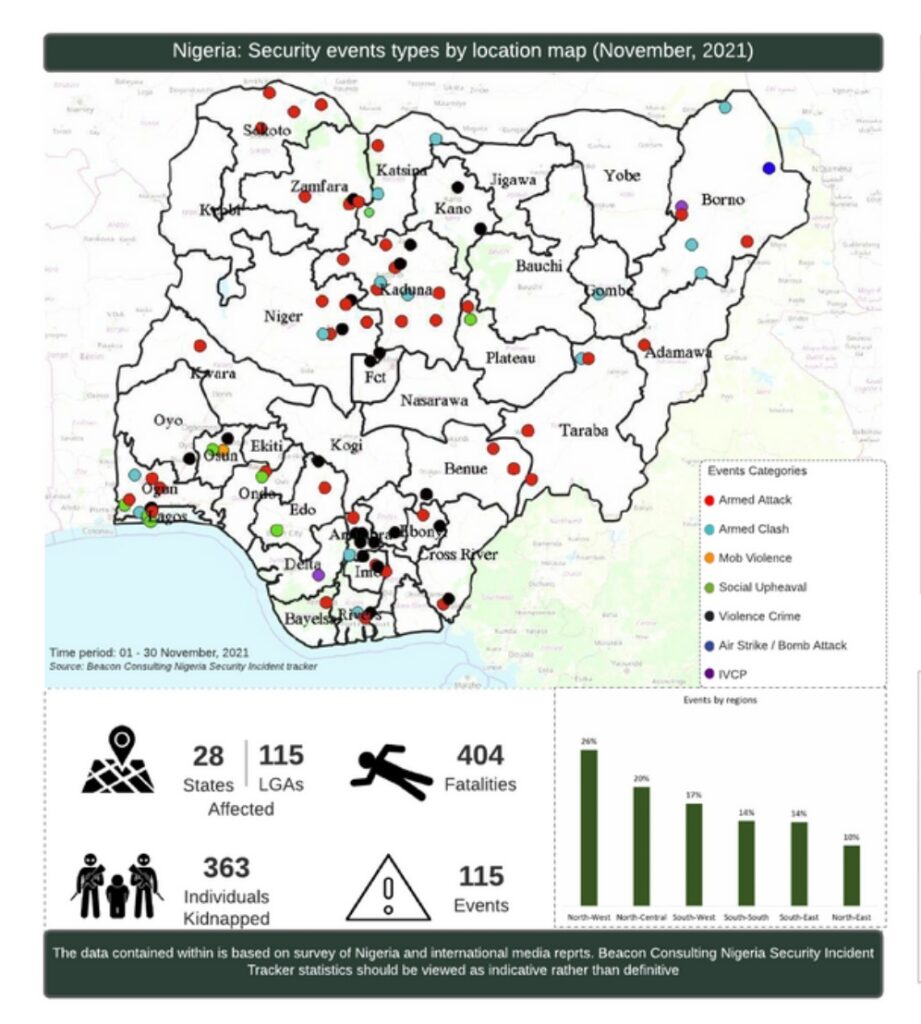 Kabiru Adamu, Beacon Consulting chief executive, said, “the thematic indications of the incidents that resulted in these fatalities include mostly armed attacks and a continuation of the trend of several non-state actors successfully challenging the state’s monopoly of the use of force.”

In November 2021, Beacon Consulting said it monitored a “continuation of the Federal and State Governments’ efforts to address the security challenges in Nigeria using mainly security forces operations, as well as attempts to tackle the root causes of insecurity including unemployment, poverty, socio-economic grievances, climate change, drug addiction and proliferation of small arms and light weapons.”

“We also monitored reactions of organized labor to the decision by the Federal Government to remove petroleum subsidies with the potential for massive social upheaval,” the report said, in part.

The report further highlighted the trends of major security issues in November to include the debate on security sector reform triggered by the release of the Lagos Judicial Panel of Inquiry report; the continuation of security forces operations across the country, including a High Court in Abuja declaring bandits activities as terrorism; the conduct of the off-cycle elections in Anambra state, among other factors.

However, the report said the major security trends observed in November 2021 pushed for the need for security sector reforms.

“The Pertinent issue of the need for police and the wider security sector reform in Nigeria was re-ignited in November 2021 following the partial rejection of a report by the Lagos State Judicial Panel of Inquiry (JPI) on Restitution for Victims of SARS, Related Abuses and Other Matters by the Lagos State Government and Federal Government”.

The Beacon Consulting November 2021 Report pointed out that “The partial rejection of the report was hinged majorly on the JPI’s findings relating to the alleged killing of protesters by the military at the Admiralty Toll Gate in Lekki, Lagos on October 20, 2020.”