The venue of the ruling All Progressives Congress (APC) gubernatorial campaign flag-off in the Gaya Local Government Area (LGA) of Kano State, Northwest Nigeria, was jam-packed on Nov. 23, when the chairman of the party, Abdullahi Abbas, declared amidst a cheering crowd that, “by all means, and using whatever way, we must win this election.”

He made this statement in the presence of thousands of political supporters including some thugs brandishing weapons and yelling party slogans—that his party must win the 2023 election “by hook or crook.”

Top politicians standing on the podium with Abass while making his inciting speech included the state governor, Abdullahi Ganduje, who had earlier said the state wouldn’t tolerate political violence in the forthcoming election.

In his reaction, the chairman of the New Nigeria People’s Party (NNPP), the largest opposition party in the state, Umar Haruna Doguwa, said his party members are prepared to respond to violence with violence.

In another development,  Alhassan Ado Doguwa, the majority leader in the House of Representatives, was seen in a video threatening to beat anyone caught voting for a party other than the ruling APC in the upcoming election.

“If we catch you voting for any other party apart from APC, we will beat you to pulp,” he said.

Though Nigerian politicians have a history of using hate speech as an electioneering tool, it has triggered violence in the past three presidential elections conducted in the last decade.

In 2011, for instance, name-calling and ethnic expressions replaced serious engagements.

In an interview preceding the presidential election, Junaidu Mohammed, National Coordinator of the Coalition of Northern Politicians, was quoted as saying, “it must be a Northerner or no Nigeria… If Goodluck Jonathan wins the PDP’s endorsement to contest the 2011 presidential election, there would be violence.”

Jonathan won and there was violence that led to the death of no fewer than 800 people and displaced 65,000 persons, according to Human Rights Watch.

Prior to the 2015 presidential election, Muhammadu Buhari threatened that if he got ‘rigged’ out of the poll, “dog and the baboon would all be soaked in blood.” In response to this, Asari Dokubo, a former militant leader from the South-south, said, “There will be no peace, not only in the Niger Delta, but everywhere if Goodluck Jonathan is not president by 2015, except God takes his life.”

To ensure that the divisive and derogatory expression does not cause violence after the poll, a non-governmental initiative committed to peaceful democratic processes known as the National Peace Committee (NPC) was formed, mandating all candidates to sign “peace accords.”

Still, no fewer than 100 deaths were recorded in 2015 due to hate speeches made before, during, and after the polls. The situation was the same in 2019 with about 150 persons killed as a result of “inflammatory political rhetoric” among others.

Fear of violence ahead of 2023

Since campaigns kicked off on Sept. 28, candidates of most political parties have been using direct insults, derogatory statements or innuendos to vilify each other.

HumAngle’s findings, however, show that the effects of hate speech have begun to be felt in places with major party stakeholders in Kano.

Last month, a clash was recorded in Gwale, the local government area of Abba Kabir Yusuf, NNPP’s governorship candidate and Abbas, APC chairman in the state.  Aside from many ‘thugs’ who were injured, an innocent teenager was also stabbed.

An eyewitness said, “The NNPP’s posters and banners were vandalised by several thugs who were thought to be APC members. In revenge, the NNPP’s supporters destroyed the APC banners.”

Speaking with HumAngle about the situation in Kano, Nura Ibrahim, a lecturer at Bayero University’s department of Information and Media Studies, argued that political hate speech in Northern Nigeria is a problem that “the government is not serious about addressing. No one would have made similar statements if the party chairman had been either arrested or suspended”.

Though the Resident Electoral Commissioner in Kano State, Zango Abdul, has cautioned politicians against overheating the polity through volatile inter-party utterances, residents appeared to be prepared for violence in the forthcoming election.

“The 2019 gubernatorial election shows that violence pays and since there is no way we can get what we voted for but through preparing for the violence, we are ready for it even though we pray that peace prevails,” a resident who spoke under anonymity said.

Under Section 97 of the Electoral Act 2022, any candidate, person or association that engages in campaigning or broadcasting based on religious, tribal or sectional reasons to promote or oppose a particular political party or the election of a particular candidate, commits an offence liable on conviction to a maximum fine of N1m or imprisonment for a term of 12 months or both.

However, major political actors have been stoking ethno-religious sentiments and personal attacks against themselves, a development capable of causing violence.

Bola Tinubu of the APC also adopted the campaign mantra, ‘Emi Lokan, Yoruba Lokan’ to lobby Southwest voters and preached against candidates from other regions.

While Labour Party candidate Peter Obi is yet to be accused of playing ethno-regional politics, he is said to be campaigning with religion.

Meanwhile, civil society organisations and political analysts have expressed displeasure over the current ethno-religious dimension ahead of the 2023 elections as Nigeria risks relapse to the era of intractable political crises.

As a Senior Advocate of Nigeria (SAN), Festus Keyamo, Tinubu’s campaign media director, is expected to know better, but he’s guilty of personal attacks on opponents.

On Oct. 24, he accused Dele Momodu, a spokesperson for the Atiku Abubakar Presidential Campaign Council (PCC), of “huffing and puffing without substance”, describing him and his team as a group of “photographers and video editors with tabloid-centred minds”.

But Melaye isn’t an exception as he also tagged Kashim Shettima, the running mate of Bola Tinubu, as the “grand commander of bandits (GCOB)” without any evidence to back the  allegation.

Also, Peter Obi’s spokesperson in Southwest, Dele Farotimi, often refers to those who are not in support of Labour Party  as “idiots, foolish and stupid”.

As the election draws closer, the National Human Rights Commission (NHRC) has threatened to name and shame politicians who engage in hate speech campaigns ahead of the 2023 elections. 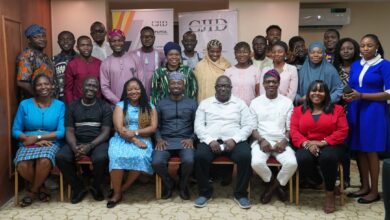